Among the women and men who settled the Connecticut Western Reserve in the early 1800s were students of the Litchfield Law School. To get an idea of the impact these individuals had on the development of the territory, I selected one student more or less at random and researched his life and the lives of his children. What I am going to sketch out here is by no means comprehensive, but it does offer an illustrative case study. Much of what I am writing is taken directly from The Firelands Pioneer, a journal first published in 1852 by the Firelands Historical Society, that is an indispensable resource for information about the settling and development of the area farthest west in Western Reserve known as the Firelands.

END_OF_DOCUMENT_TOKEN_TO_BE_REPLACED

In the early 1880’s my great grandparents, Christina Nilsson and Carl Axel Gustafson immigrated to America from the region around Vasterutland, Sweden. In 1885 they were married and started their family. They had a farm in the vicinity of Litchfield but its exact location is lost to memory. Grandpa Gus was always described to me as a huge Viking of a man with a big red beard and Grandma as a tiny woman who loved life. Their lives as hardscrabble farmers weren’t easy.

When women got the vote in 1920, and the time came for Grandma Gus to register to vote, Grandpa absolutely forbade it. I’m not sure how he didn’t know this about her but Christina Nilsson was a very determined woman. So on the appointed day, at lunchtime when Grandpa came in from the farm, she kept his beer glass full the whole time. That ensured that he would take a good long nap. And it had to be a long one because it was a long way to town. She hitched the horse to the wagon, and quietly headed out on the farm road. Family lore has it that by the time she returned from town, the horse was pretty tired from the speed she demanded of it. Grandma Gus got home just 15 minutes before Grandpa woke up. He may have forbidden her, but nevertheless she persisted!

I discovered one of my mother’s birthday calendars and glanced through. There was an entry saying Grandma Gus died February 18, 1931 at age 73, which means she was born in 1858. She and Carl Axel married when she was 46 in 1885. So her determination to vote came when she was 62 years old! So the photo of above with the wagon might actually have been taken close to the time of this incident.

Dr. D. E. Bostwick, father of noted librarian and author Arthur E. Bostwick, was crossing the village green in Litchfield, Conn. sometime in 1870. A hot liner from a nearby baseball game struck him in the eye, knocking him to the ground. While Dr. Bostwick recovered from the injury, his son Arthur wrote in 1930 that his father “might have been killed by it.”(1) The accident, he believed, may have resulted in the game of baseball being banned on the Litchfield town green.  By the 1870s, baseball had taken hold in America, with sports journals already touting the game as “America’s pastime.” Luckily for the residents of Litchfield, there was always wicket.

Wicket, or wicket ball, was one of a number of bat-and-ball games played by Americans in the era before baseball. New England was the heart of wicket country, with Western Massachusetts and especially Connecticut serving as strongholds of the game. There is little definitive history on the origin of the game. Most historians agree that wicket began as an early form of cricket imported to New England by English settlers sometime in the late seventeenth century. (2) Some speculate that the cricket “savored so much of the English aristocracy” that the settlers of New England gradually changed the game’s features, shaping a primitive version of England’s national pastime into a uniquely American sport. (3) Wicket utilized a larger and lighter ball than cricket, and was played with low-standing wickets of greater width and as many as 30 players a side. So far, no documented variation of cricket played before the mid-eighteenth century (when English players began codifying and regulating cricket play) has contained these traits, leading wicket scholars to surmise that whatever the form of the game that arrived in America, “wicket most likely evolved markedly once it had set down American roots.” (4) 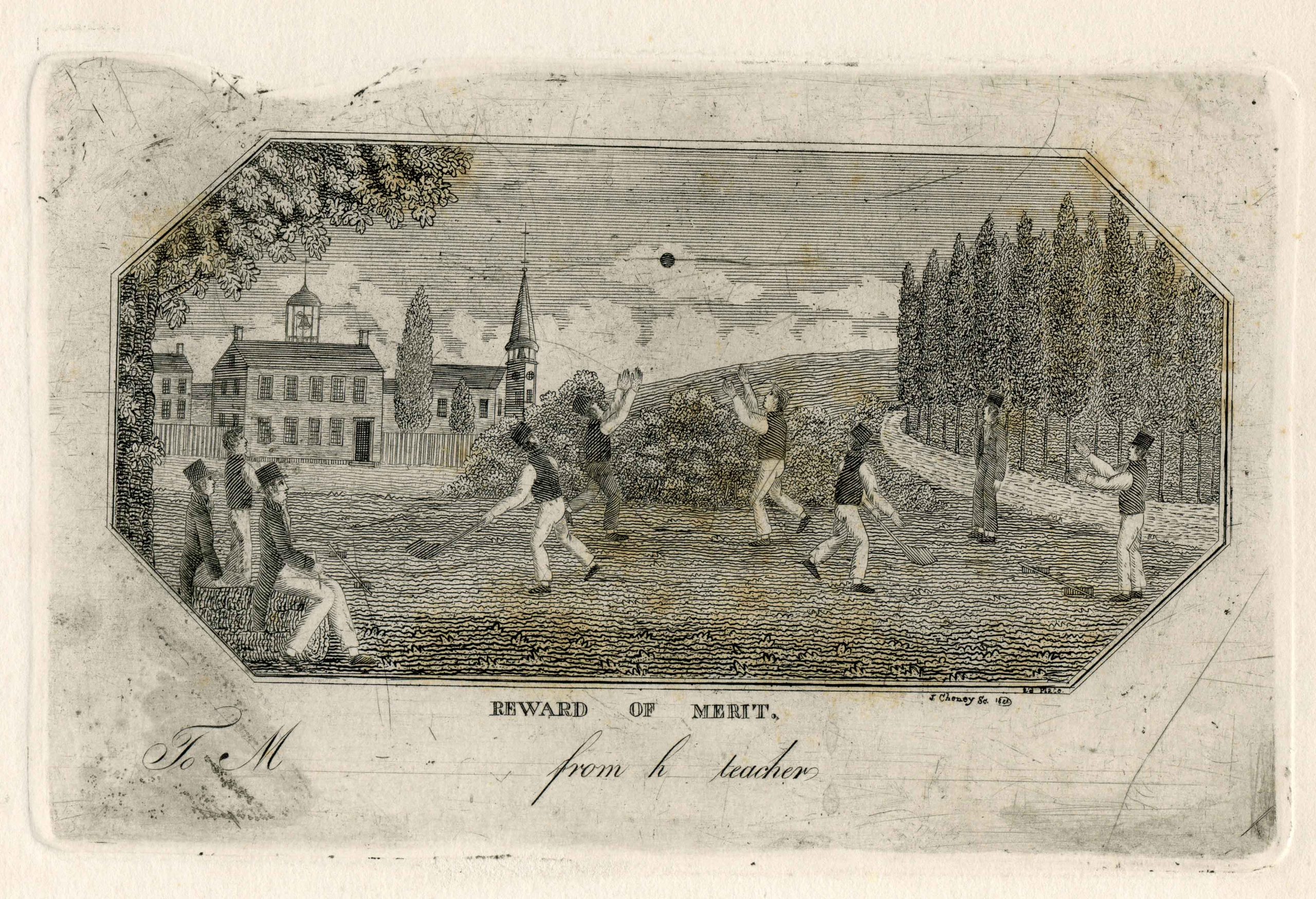 The earliest recorded games of wicket date from the late-colonial period, although later wicketers recalled the game being a favorite pastime “long prior to the Revolution.” (5) Project Protoball contains numerous entries for the game, the earliest specific mention of wicket being a game played on the Boston Common sometime around 1725. (6) On two occasions in May, 1778, soldiers stationed at Valley Forge recall playing wicket. The latter game involved George Washington himself, who played wicket with his men after dining with General Henry Knox. (7) It is likely that wicket play in the eighteenth century was largely unorganized and played without written rules or officiating. By the 1800s, however, organized wicket clubs and village teams began appearing in New England, though most (if not all) lacked formal club constitutions or officers. While the sport never attained the professional organization of baseball, wicket games were often accompanied by official rules and officiated by up to three umpires or judges. Diaries, memoirs, and newspaper articles also attest to the fact that wicket was a spectator sport: when the wicketers of New Britain, CT, headed to Bristol in 1859 to play for the state championship, the following occurred:

“Interest had also grown in Hartford to such an extent that a special train was made up in that city for the event. The train left Hartford at 7:30 A.M., with one carload of Hartford people and when it reached New Britain, four cars were quickly filled with excited people. Every car was trimmed with flags and bunting and as the train reached the local station about nine o’clock it presented a grand appearance. The visitors had a band with them and the crown that greeted them at the station was a large one. It is estimated that when the game commenced there were fully 4,000 people in and around the grounds.” (8)

END_OF_DOCUMENT_TOKEN_TO_BE_REPLACED

Wise and Brave: The Fight for Women’s Voting Rights in Litchfield: read about Litchfield’s role in the Connecticut Women’s Suffrage Association and the creation of the Litchfield Equal Franchies League. It was contributed by Jessica Jenkins.

Its hard to believe that it is mid-November already. Here at the Litchfield Historical Society that means that the museums will soon be closing for the winter season. With only a couple of weeks left we hope that you will take advantage of stopping by the Tapping Reeve House or the Litchfield History Museum by December 1. Although the museums will be closed to the public during the snowy months that does not mean that things will slow down here for the staff. With the museums closed we will be busy changing exhibits in preparation for the beginning of next years exhibition season. What does that mean for you? It means you only have a handful of days left to stop in and see our Civil War exhibit, The Hour of Conflict before it comes down!

The exhibit closing however, does not mean the end of your chance to come into the museum and learn more about Litchfield during the war. Throughout the year we have all kinds of visitors who come to the historical society to research with both our archival and museum collections. Some are serious scholars, while others may have another reason for wanting to view a specific item. Occasionally the reason is very personal. This past year we had a very touching visit from a family regarding a Civil War item that is as important to their familys history as it is to our local story about the Civil War.

For almost one hundred years the Litchfield Historical Society has cared for the Civil War overcoat of Sergeant Edgar A. Alvord. In March of 1915 the seventy-five year old veteran, and member of the Litchfield GAR, personally came to the historical society looking for a safe place to deposit the overcoat that he wore during the war. It was his hope that it would be well taken care of and respected even after he was gone. Ninety-eight years later Mr. Alvord’s great-grandson, Don Alvord, came through the same front door of the Noyes Memorial Building and brought with him his wife, cousins, and grandchildren to view the coat that his great-grandfather cared so much for. Born in Morris, CT in 1840, Edgar A. Alvord was twenty-one years old when he enlisted as a Private in the 5th CT Infantry. After a year of performing guard duty along the Potomac River Alvord was wounded and captured at the battle of Cedar Mountain, VA during a charge on the Confederate Army. He was imprisoned for one month at Libby Prison (notorious for the overcrowded and harsh conditions) in Richmond, VA before being moved to the prison at Belle Isle for another two months. He was then paroled and moved to Annapolis, MD and again to Alexandria, VA before being exchanged back to the Union Army. In December of 1863 Alvord re-enlisted in the Union Army as a veteran and was promoted to Corporal and then to Sergeant. In 1864 when he traveled home to Connecticut on furlough Sergeant Alvord brought his overcoat with him and left it in the care of his family in Morris for the remainder of his service in the Union Army. On July 19, 1865 after four years of active service where he served in several battles and was with General Sherman’s March to the Sea, Sergeant Edgar Alvord was mustered out from the Army and returned home to Morris.

Don Alvord’s trip to the Historical Society this year was a real family affair. Not only did Don and his wife make the trip from Missouri, but they brought cousins and grandchildren along with them to the museum to see Sergeant Alvord’s coat. Being a veteran and son of a veteran himself, viewing an item used in wartime by his great-grandfather solidified for him the importance of service to your country and family tradition. One of the highlights of the visit came when the family and Historical Society staff were able to share information with each other about the coat and the Alvord family. Working together the group was able to uncover many bits of family and local history. As the family placed a treasured photograph of Sergeant Alvord next to the coat for a photo op it became obvious that both the family and the Litchfield Historical Society are working to preserve the history and memory of one of Litchfield County’s Civil War hero’s for future generations. Srgt. Alvord and His Overcoat Reunited After 98 Years